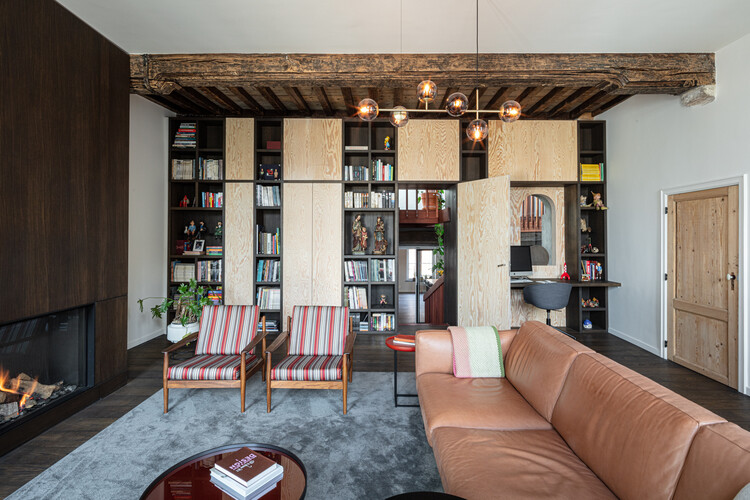 Text description provided by the architects. When Toon and Ina bought a monumental building in the center of Ghent, they were faced with a complex renovation project. The mission: to make a contemporary family home from two connected historic buildings. The volumes have been preserved almost everywhere. However, pure restoration was not the order of the day: in 600 years the building had already been so renovated and changed in function so much that it was impossible to go back in time authentically. The first sources mentioning this place date from the 14th century. The cellar with brick vaults dates from the time when there was still a brewery there. There used to be an alley next to the house that led to the second home. But most of the building dates from 1640, when the port of Ghent was just behind. Later still, there was a playing card printing house and a music school there.

The huge building, which consists of a front house and a rear house, has four floors in the front and three in the back. Over the years, the space between the buildings has also been cleverly closed. The well between the two houses was again opened. The massive “exterior walls” of the two houses were covered with a layer of cement, as one would finish a garden wall. But to establish the link between all levels of the two buildings, a complex of wooden stairs was laid out in the well. These allow circulation between the floors in both parts.

The effect of this complex of stairs, right between the historic buildings, is enormous. Especially now that the light is penetrating deep into the house through the original roof truss, which was covered with veranda glass. When you’re downstairs, this playful padauk stairwell looks like a 3D version of an Escher drawing. From above it looks more like a thrilling ride through an adventure park. Quality architecture with high Peter Pan content. The particularity: in this patio with rockery, you don’t really know if you are outside or inside. And the fact that the floor is paved with slate reinforces this effect.

The big challenge here was to make a cohesive whole from two houses. With respect for the elements of the past. The massive wooden trusses and the original ceilings were a gift but at the same time difficult. These have been kept, while the upper floors have been replaced each time. New floors and other customizations are mostly oak. For example, the bridge will be laid with the authentic solid oak beams, so emblematic of this project.

Traces of the building’s construction history were allowed to remain visible, but the couple wished they could live here today, with their two daughters. A big challenge was to bring all the techniques into the house invisibly. The solution turned out to be a new technical tube, integrated into the interior garden. It carries the elevator, bathrooms and toilets, electricity and all other utilities to each floor, without mutilating the house.

The kitchen is located at the front street side on the first floor, closed from the stairwell by veranda doors. Downstairs, on the garden side, is a multipurpose room that the owners use to organize parties, as a recreation room and as a summer lounge. With the exception of a few alterations, the room has remained intact. Elsewhere in the house, too, people were very careful with plastering and painting.

The exercise was to clean everything up enough for the old charm to return. The historic staircase in the back house takes on its full meaning in this way, and the original rough stones have been preserved above. The stairs lead to a library / sitting area on the first level and to the dormitories on the second. The master bedroom is located under the 400 year old roof trusses. The freestanding tub is housed in a hotel suite in a niche between the sloping beams.